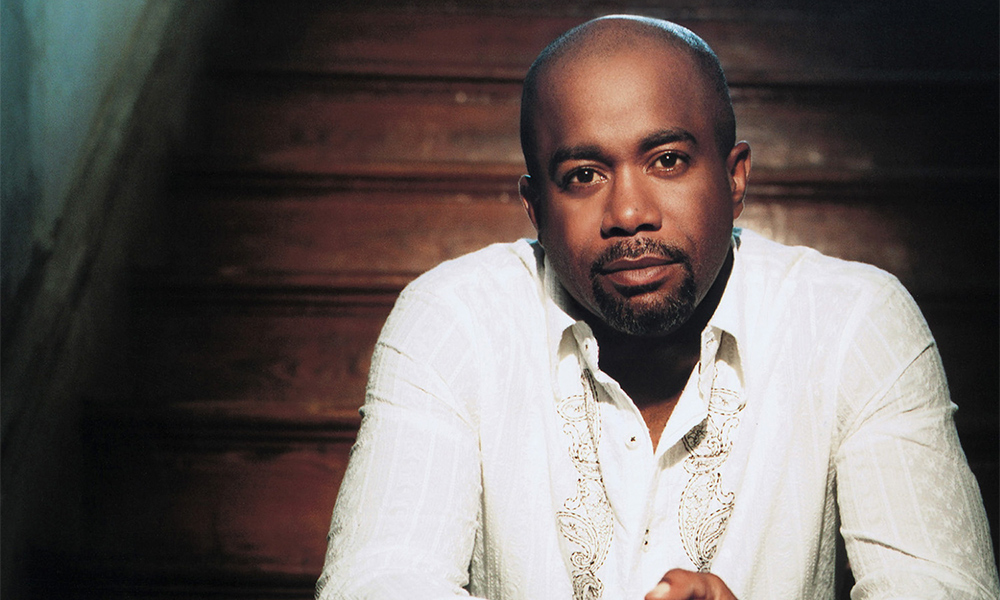 Darius Rucker defied all odds in 2008 when he made the successful and difficult transition from rock-pop star to country star. Many before him have tried such a move, but few have ever succeeded, and virtually none succeeded to the extent that Rucker did, and all with just one album. From Hootie and the Blowfish frontman to bona-fide country music sensation, Rucker achieved the impossible, and his future in country music appears to be very bright.

Darius Rucker was born on May 13, 1966 in Charleston, SC. His father wasn’t around much to help raise him and his five siblings, so it was up to his mother, Carolyn, to raise her three daughters and three sons. They didn’t have money, and times were difficult, but Rucker does look back on his childhood with a sense of fondness. At one point in his life, he lived in a 3-bedroom home with 14 brothers, sisters and cousins, a couple of aunts, his mother and his maternal grandmother.

Rucker would see his musician father from time, especially before church on Sundays, but he wasn’t a part of his family’s everyday life. Rucker’s dad played in a gospel band called The Rolling Stones, and this gift of music was passed down to Darius, who always had the dream of becoming a singer. He sang constantly around the house to his mother’s Al Green records, as well as in church and high school choirs. It wasn’t until graduating from Middleton High School and entering the University of South Carolina that the real potential of a career in music began to take hold.

In between his studies at college, Rucker befriended a number of musicians, and they eventually started a band known as Hootie & the Blowfish. Over the years, people mistakenly thought of Rucker as Hootie, but the truth is that the name Hootie referred to one of the other musician’s whose glasses had an owl-like characteristic to them. The group became popular on the college circuit and toured as much as possible, sometimes playing for very little money or even just free beer.

In 1991, they self-financed an album and began selling it at their shows. Titled Kootchypop, it went on to sell over 50,000 copies, a very large number for an unsigned band self-promoting their own album. Atlantic Records got wind of the group and signed them to their first major recording deal.

In 1994, Hootie & the Blowfish released their debut album, Cracked Rear View, and the album went ballistic, shooting straight to No. 1 on its way to selling a mind-boggling 16 million units. As the frontman, Rucker became the biggest star in the band, and his deep and very unique baritone voice gave the band its easily recognizable and approachable sound. The public loved them, the critics applauded them, and when the dust had settled on Cracked Rear View, the group walked away with three top ten hits (“Hold My Hand,” “Only Want to Be with You” and “Let Her Cry”) and two Grammy awards.

In 1996, Hootie & the Blowfish released its sophomore album, Fairweather Johnson, and though the album didn’t sell nearly as many copies as Cracked Rear View, it still surpassed the triple-platinum mark in the United States. Over the next nine years, the group would release four more studio albums, including Musical Chairs (1998), Scattered, Smothered and Covered (2000), Hootie & the Blowfish (2003) and Looking for Lucky (2005).

As sales and success for Hootie & the Blowfish waned in the late 1990s, Rucker turned his attention to building his solo career. In 2001 he recorded his first solo album for Atlantic Records titled The Return of Mongo Slade. Contractual obstacles prevented the album from being released, so he left Atlantic and signed with Hidden Beach Records. In 2002 he released his first solo album, Back to Then, and its contemporary R&B flavor mixed with jazz, folk and hip-hop proved a stark contrast to the pop-rock music of Hootie & the Blowfish. Critics were generally kind to the album, though radio programmers weren’t exactly sure where the album fit in, and it subsequently faded from public awareness.

In 2008 Rucker set his sights on entering country music. He signed with Capitol Nashville and went to work on his debut album, Learn to Live. His debut country single, “Don’t Think I Don’t Think about It,” was released on May 3, 2008 and shot to No. 1 on Billboard’s Country Songs chart and No. 35 on the Hot 100, which made Rucker the first African-American in 25 years to have a No. 1 country hit since Charlie Pride’s “Night Games” topped the charts in 1983. Learn to Live was eventually released on September 16, 2008 and went on to spawn three additional major hits: “It Won’t Be Like This for Long” (No. 1), “Alright” (No. 1) and “History in the Making” (No. 4). A slew of Nashville’s finest artists contributed their vocals and musicianship to the album, including Alison Krauss, Vince Gill and Brad Paisley. The album sold over 60,000 units on its way to debuting at No. 1 on Billboard’s Country Albums chart and No. 5 on the Billboard 200.